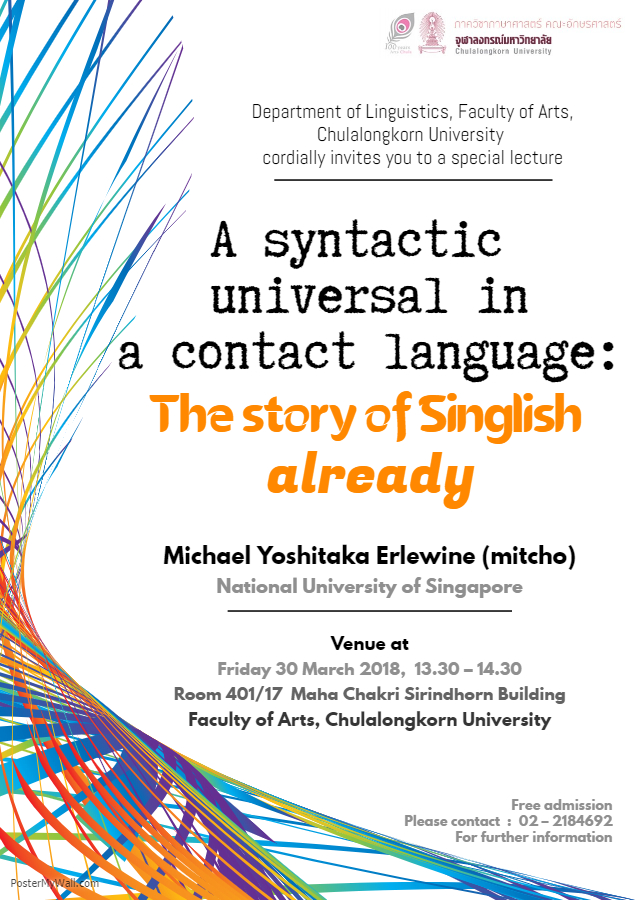 The Department of Linguistics, Faculty of Arts, Chulalongkorn University cordially invites you to a special lecture: A syntactic universal in a contact language: The story of Singlish “already”

In this talk, I discuss the synchronic syntax/semantics of sentence-final already in Singlish (also: Colloquial Singapore English), a contact language with significant Chinese substrate influence, and implications for the nature of the Final-over-Final Constraint (FOFC) (Biberauer, Holmberg, and Roberts 2014, a.o.) and Spell-Out. I begin by largely adopting and refining Bao’s (2005) proposal that already is the result of a relexification process (Lefebvre 1998) in the development of Singlish, pairing the syntax/semantics of the Chinese sentence-final article le/liao/laa with the English surface form “already.” I then show that the semantic scope of Singlish already shows that it unambiguously attaches high to its host clause, above TP (Cheong 2016), whereas Chinese cognate particles le/liao/laa unambiguously attach clause-medially, between VP and TP (Erlewine 2017). This situation leaves us with a puzzle: Why is Singlish already at the clause edge, unlike its substrate cognate le/liao/laa? (Note that, due to its sentence-final position, word order is uninformative or at least under-informative for the language learner.) I propose that this discrepancy in height is explained by an interaction between the Final-over-Final Constraint, enforced over Spell-Out domains (Erlewine 2017), and verbal inflection suspending Spell-Out at vP in Singlish but not Chinese languages.